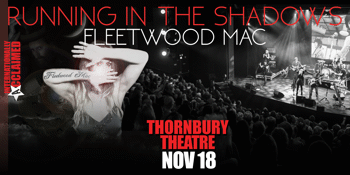 Running in the Shadows of Fleetwood Mac

Thornbury Theatre - Ballroom (Thornbury, VIC)
Friday, 18 November 2022 7:00 pm
145 days away
18+ (unless accompanied by Guardian)
Rock
POP
Tribute
Send this event to
They’ve sold more than one hundred million albums world-wide and been inducted into the Rock and Roll Hall of Fame – Fleetwood Mac’s songs are part of international music history.
Now, the Internationally acclaimed The Australian Fleetwood Mac Show Running In The Shadows is heading to the Thornbury Theatre to pay homage to the superstar band on November the 18th. The six-piece rock band explore Fleetwood Mac’s extensive back catalogue, covering all the classic ballads, blues and rock songs from their five decade plus career.
The Running In The Shadows show covers the best of Fleetwood Mac’s career. From the early hits from the music of Peter Green, through to the Rumours album era, spanning up to Tango In The Night and even some of Stevie Nicks solo material, there is something for every Fleetwood Mac fan to enjoy. Audience members who have seen The Australian Fleetwood Mac show in the past have found it hard to believe they were not experiencing the real deal on stage.
They have spawned some of the biggest songs in recent memory, with tracks like Rhiannon, Landslide, Go Your Own Way, Dreams, The Chain, Tusk, Sara and Big Love to name a few, they carved music history and their music is appreciated by young and old.
Don’t miss The Australian Fleetwood Mac Show Running In The Shadows as they explore the iconic music of Fleetwood Mac.